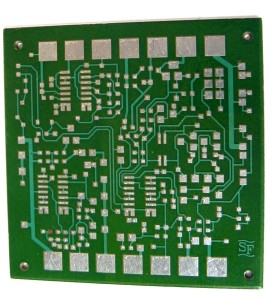 Assembly onto a circuit board can be constructed in 2 ways: through-hole and surface-mount, each with their own advantages and uses.

With through-hole assembly the leads (sometimes also called pins) of the components are pushed through holes in the circuit board and soldered on to pads on the opposite side. The bare board PCB would have a hole for each lead wire of each component. The method of through-hole assembly is done with the use of mounting machines (wave solder or selective solder) but can also be done by hand (manual assembly).

This method was especially popular from the 1950s to the 1980s; in the 50s, through-hole construction replaced the more prevalent point-to-point construction. In the 1980s, surface-mount technology became more popular when small surface mount parts began to be used more increasingly, due to smaller board requirements and lower production costs.

The bonds formed by through hole technology are stronger than surface mount assembly, but current technologies require smaller geometries on the PCBs and more complicated electronic components that require SMD technologies.

Through-hole PCB assembly limits the available area of the circuit board, reducing the ability to add signal traces on multi-layered boards and require larger PCB area.

It is , therefore, not the most elegant of assembly techniques and not as widely used currently, especially as electronic components and boards become smaller, more complex and more compact. Through-hole mounting is usually now done only on bulkier components and applications that require the additional strength that through-hole provides. It is also very common to see a combination of through-hole and surface mount technology in the same application.

Posted in Through Hole Tagged with: pcb assembly, through hole assembly